Roscoea are robust herbaceous perennials in the ginger family.  They are suitable for the front of borders, in a rock garden or grown in a container.  With orchid-like flowers in the summer they can be found in colours ranging from white and cream through pinks, brick reds and purples.  They have tuberous, fleshy roots (similar in appearance to dahlia) that become dormant in late autumn.  New shoots appear from April onwards.   Early varieties such as R. cautleyoides flower in May, most flower in June but the later varieties such as R. ‘Summer Deep Purple’, R. ‘Harvington Imperial’ and R. ‘Wisley Amethyst’ flower in July and R. ‘Red Gurkha’ flowers in August and even into early September.  They are hardy throughout the British Isles.

We despatch Roscoea tubers during March and April while dormant. They are sold as large flowering-sized tubers ready for planting out.  They will be available to order on the website again from early 2021.  If you would like to pre-order, our mail order leaflet and price list is here:

Our selection of Roscoea includes five with the prefix ‘Harvington’:

These are a set of distinctive plants bred by Hugh Nunn in the village of Harvington in the Vale of Evesham and selected for their beauty, vigour and garden worthiness.  Several have been awarded the Royal Horticultural Society’s Award of Garden Merit (AGM) in recognition of these characteristics. 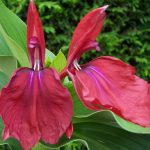 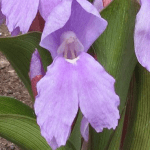 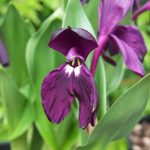 Just to confirm my order arrived safe and well today, I am very impressed with the whole packaging, information and condition of the plants themselves . Also the various catalogues, I will be a return customer next year!
Thanks again