Grown at Wisley and propagated by us in celebration of the bicentenary Royal Horticultural Society.

Roscoea purpurea ‘Wisley Amethyst’ has beautiful orchid-like creamy white and purple flowers which appear from June through to August, and grows to a height of up to 40 cm. It was originally collected by plant hunter Frank Kingdon-Ward in 1938, and grown at Wisley and propagated in celebration of the bicentenary of the Royal Horticultural Society.

A belated thank you for my plants [9cm Harvington Hellebore pot plants] which arrived safely and on time.
They were probably the best packed plants I have ever received and lovely plants as well.
Thank you very much. 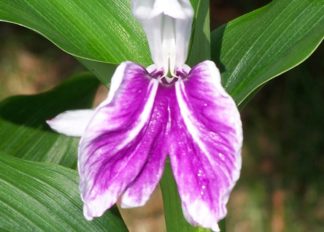