Roscoea ‘Harvington Imperial’ has red flowers with royal purple streaks on the falls of the flower. The flower stems are red. A distinctive new group of Roscoea that flower from July through August.

Our selection of Roscoea includes four with the prefix ‘Harvington’.  These are a set of distinctive plants bred by Hugh Nunn in the Vale of Evesham and selected for their beauty, vigour and garden worthiness.  Several have been awarded the Royal Horticultural Society’s Award of Garden Merit (AGM) in recognition of these characteristics.

Roscoea are robust herbaceous perennials in the ginger family.  They are suitable for the front of borders, in a rock garden or grown in a container.  With orchid-like flowers in the summer they can be found in colours ranging from white and cream through pinks, brick reds and purples.  They have tuberous, fleshy roots (similar in appearance to dahlia) that become dormant in late autumn, with strap shaped leaves from April onwards.  Some appearing above ground as late as June in the case of R. ‘Red Gurka’.  They are hardy throughout the British Isles.

Water well after planting and as the plant establishes.  Ensure that they don’t suffer from drought in the summer or waterlogging in the winter.

A belated thank you for my plants [9cm Harvington Hellebore pot plants] which arrived safely and on time.
They were probably the best packed plants I have ever received and lovely plants as well.
Thank you very much. 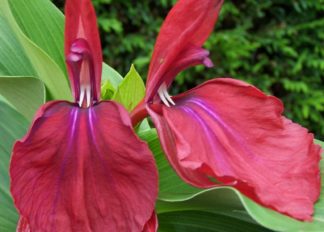